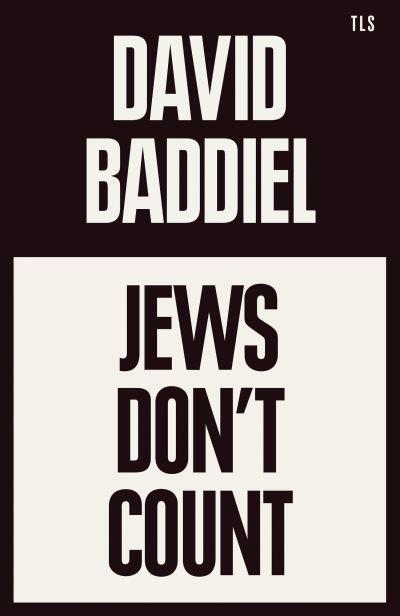 Antisemitism came to the public consciousness no greater than when the Labour Party, under the leadership of Jeremy Corbyn, failed the Jewish community. So spectacular was this failure, that it led the Party to be investigated by the Equality and Human Rights Commission (EHRC). To put this into context, the only other party to gain the EHRC’s attention and therefore be subjected to an investigation was the British National Party (BNP) widely accepted as a racist Party.

The thesis underlying the book Jews Don’t Count by David Baddiel is that there is a hierarchy of racism. That some racisms are more equal than others. That whilst other ethnic minorities can suffer from it, so too can Jews. But the significance between racism towards Jews and other ethnic minorities is starkly different. It is Jews that are the losers when it comes to highlighting and tackling the racism.

Jews are seen as white and privileged, therefore the impact of racism against them is less than that of other ethnic minorities. Jews hold a double status. For example, they are seen as white by progressives and not white by white supremacists. Jews therefore are stuck between a rock and a hard place. If many Jews felt politically homeless because of Jeremy Corbyn, then antisemitism has also made them ethnically homeless when it comes to who they are.

Baddiel calls this “double racism”. The idea that – for example – Jews are rich and black people are poor. Therefore, Jews cannot be victims, but black people can. There is an original sin analogy somewhere here. That you are either born powerful, or born weak and the two are immutable characteristic assigned to each ethnic minority as if it is essential to their being and identity. This is a bigotry of low expectations towards black people and a complete erasure of the struggles and discrimination faced by Jews. Baddiel advances this argument further:

“The problem is that Jews occupy a socio-cultural grey area. Jews, although marginal, are not thought of as marginalised.”

“One’s Jewishness, just like one’s skin colour, is an accident of birth, and as far as the racists are concerned – and they, sadly, are the people that matter as far as racism goes – you can never lose either.”

Jews have been let down by progressives. There is no victory, or perhaps not even any value is standing up for the Jew. So much so that the double standards of calling out Piers Morgan for his apparent mistreatment of Meghan Markle is seen as more worthy, than perhaps calling out the former Leader of the Labour Party Jeremy Corbyn. Baddiel goes onto explain:

“It is the prerogative of those on the receiving end of any specific racism to define that racism. They get to say what is and what isn’t racism and Piers Morgan does not.”

So why isn’t this the case for Jews? The book explains this is more detail.

The holocaust is an inconvenience for some of these progressives. Whilst antisemitism predates WW2, the fact that Jews suffered horrendously as a result of it, leaves these progressives with nowhere to turn other than to admit that it was the worse kind of antisemitism to have ever taken place. It seems like this is a bitter pill to swallow, a truth they wish was false. Because all that matters to them is, minorities do not and should not include Jews. Progressives are the gatekeepers of who qualifies as an ethnic minority. This is why the concept of whataboutery is employed and is then used against Jews, particularly in the case of the Palestinians.

David Baddiel provides further examples of how Jews are let down and he goes into much more detail than this review will allow me to write. Jews Don’t Count is an excellent read. It is accessible, funny and honest. It seeks to bring non-Jews into the Jewish world where aggressions against them occur every day, yet are either dismissed or ignored. It highlights a blind spot that progressives fail to see in themselves. It seeks to ensure that their plight does not matter anymore than any other ethnic minority, just that when they are attacked, they are treated in the same way.

If Jews don’t count then David Baddiel has provided the reader with a persuasive case of why they should count. The fact that I am even concluding this, just goes to show why this book is needed and how we, the general public, need to take a hard look at ourselves when an ethnic minority is being let down. Never again must mean never again.

Read more: You can stand firmly against antisemitism and for Palestinian rights….