MAAS will be building a library of useful aids to challenge anti-Semitism. We will take manifestations of anti-Semitism and provide useful means to help you challenge them. First in this series we are looking at collective blame and conspiracy theories surrounding 9/11. 9/11 has seen hateful narratives created against both Muslims and Jews and in seeing how both of theses narratives have been created, their basis and why they are both false and dangerous we hope that you will have useful information to challenge these perceptions yourself.

Twin towers: The Jews did it! The Muslims did it! 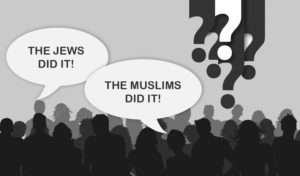 Conspiracy theories might seem crazy, sometimes amusing but definitely not worth our time or attention. Wrong. Conspiratorial blaming around the twin towers provides a strong example as to why we must pay heed to conspiracy theories and dedicate time to challenging them.

On September 11th 2001 the Islamist extremist group, al-Qaeda, used four passenger airliners as weapons to attack the United States killing 2,996 people and injuring 6,000 others, causing Wall Street to close, resulting in a global economic downturn and closing civilian airspace in the US and Canada for two days. Despite the catastrophic effects this terror attack had on civilians and the economy, some adopt a belief that all Muslims were tacitly involved, or that it was not an Islamist extremist terror attack at all but an attack by the Jews.

Let us take first the notion that all Muslims are to blame for 9/11:

The thinking is this: 9/11 was perpetrated by Muslims therefore all Muslims are a threat. This kind of thinking saw hate crime against Muslims rise from 28 reported incidents to 481 in 2001 following 9/11.[1] It is the type of thinking that results in consistent spikes in anti-Muslim hate following Islamist inspired attacks. It relies on the belief that all Muslims are ideologically aligned and violently inclined. It is in fact a very easy fallacy to contest; firstly Muslims believe in a number of different interpretations of Islam belonging to a number of branches and can never ideologically be treated as a whole. 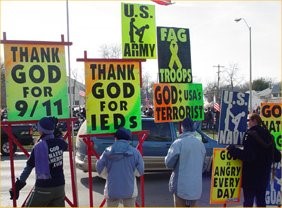 A useful parallel to draw here is with the Westboro Baptist Church: this widely reviled Christian sect spreads hate speech and is considered a hate group by nearly everyone, yet no-one would consider this group to be representative of Christian belief and practice as a whole.

Secondly even of those who adopt an extreme literalist interpretation of Islam are unlikely to believe in violent Jihad as a means to achieve religious/ political goals. For example, Saudi Arabians whose dominant faith is Salafi/ Wahabism, which insists on a literalist interpretation of the Qu’uran, and has been accused of laying fertile ground for terrorism, mainly emphasize dawa and reform as a way for spreading their ideology rather than violence.[2]

A useful parallel here is violent attacks perpetrated by the far right: even the most right leaning people in this country abhor far right violence like the killing of MP Jo Cox, yet they continue to disagree with her politics and may be accused of laying fertile ground for future violence. To conclude here there are a plethora of beliefs within Islam and even the distinct minority who adopt a literalist view are very unlikely to agree with violent measures. Therefore, despite the attackers of 9/11 being Muslim it does not follow that all Muslims should be considered a threat.

Now let us turn to the conspiracy theory that Jews were behind 9/11:

Hezbollah’s television station Al-Manar ‘reported’ that 4,000 Israelis employed at the World Trade Centre did not show up for work that day because they were told in advance of the attacks. This then became central to the conspiracy that it was Israel and the Jews, not Al-Qaeda, that perpetrated 9/11. [3] In fact it is estimated that 400 Jews died in the attack.[4]

Unfortunately, a conspiracy theory like this is not surprising: there is a concerning popular point of view that Jews control world affairs. A recent CNN survey showed that 28% of Europeans believe that Jews have too much power over business and finance.[5]

Again, we see a diverse and complex group treated as a whole. This is complicated further by conflating being Jewish with actions of the state of Israel. Jews hold a variety of different political and ideological views, and not all Jews believe in the Zionist ideology (the belief in a right to a Jewish homeland) and then many Zionists do not agree with Israeli state action.  So to treat all Jews as a whole and to consider all Jews to be supporters of and actively involved in Israeli state action is again a fallacy.

The problem with collective blame, according to neuroscientist Emile Bruneau co-author of Interventions highlighting hypocrisy reduce collective blame of Muslims for individual acts of violence and assuage anti-Muslim hostility[6] is that “If you collectively blame an entire group for the actions of individuals, it makes it totally reasonable to exact your revenge from any person from that group… You get a cycle going on where each cycle is motivated to commit violence against totally innocent members of the other group.”[7]  The obvious example here is the Holocaust. The Jews were blamed for the economic problems Germany faced and were painted as a threat to national security and prosperity. As the nationalist propaganda began to take root, the majority of German citizens accepted, encouraged and even participated in the mistreatment of Jews under Nazi rule. To give an even more direct example, Kristallnacht, when 267 synagogues were destroyed and an estimated 90 Jews murdered by the SA and civilians, was seemingly in response to the assassination of the Nazi German diplomat by a German- born Polish Jew, but can be seen as a direct result of shifting blame collectively, where one Jewish person’s actions were used to instigate aggression of the whole community.

It may also be useful to consider why conspiracy theories are formed at all. Conspiracy theories are often created to either shift blame from a certain group or pin blame on another group. It is no surprise then that Jewish conspiracies surrounding 9/11 are widely held across the Middle East. Another reason may be to make sense of reality when it goes against set beliefs, for example: those who do not believe that we had the technology to go the moon, may adopt conspiracy theories advocating that the moon landing was faked. They can also empower the conspiracy theorists with a sense of superiority as they might feel they know something others don’t, and that they have unmasked something that those in power do not want them to know.

As David Baddiel put: ‘Conspiracy theories are a way for idiots to feel like intellectuals.’