“Antisemitism is a certain perception of Jews, which may be expressed as hatred toward Jews. Rhetorical and physical manifestations of antisemitism are directed toward Jewish or non-Jewish individuals and/or their property, toward Jewish community institutions and religious facilities.”

Since Jews lived on this earth they’ve been hated, mocked, laughed at, disliked and seen as nefarious controllers of the world just because they were Jewish. Their views, skin colour, origin, gender, economic level, gender, sexuality etc does not matter to these people, all antisemites’ see is a Jew to blame all the world’s problems, to hate, to dump all the fears of the other on.

This is why antisemitism is such as wide-ranging ideology, coming from across the political spectrum and hiding in many guises and continually metamorphosing like the three headed monster, who every time you think you have killed comes back bigger and stronger in a different guise. Jews have been blamed for capitalism and communism, greed and poverty. If something troubles you, antisemitism tells you the Jew is the eternal scapegoat.

The heart-breaking thing for me and so many Jews and non-Jewish allies fighting antisemitism is that the situation seems to be getting worse and worse. I’ve been monitoring, speaking out and attempting to root out antisemitism in the UK since 2012 and I wish I could say the situation has improved by then, but it has significantly worsened.

A report in July 2014 by the Institute for Jewish Policy Research ‘The Exceptional Case? Perceptions and experiences of antisemitism amongst Jews in the United Kingdom’ found that from 2009-2014 70% of UK Jews said antisemitism had grown. Then there were the problems those Jews faced who were observant. The report discovered that 60% of Jews who were traditionally observant sometimes avoided public display of Jewishness such as wearing a kippar.

In 2018 the Community Security Trust – which is monitors antisemitic crime incidents across the UK recorded a record 1,652 antisemitic incidents, a 16% rise on the 1,420 incidents recorded in 2017.

These are all statistics but behind them are personal stories like mine.

I was born in 1990. When I was around 5 to 6 being Jewish was great. I ate cool food at Jewish festival. I also had lots of non-Jewish friends who found it cool I was Jewish.

By the age of 7, being Jewish became a burden, as I was bullied simply for being Jewish. Its this bullying which to this day has robbed me of a lot of self-belief and I believe is a key reason why I am so susceptible to depression. The bullying continued till secondary schools and I did react in ways that did not help. I didn’t want to be Jewish, all it caused me was problems.

There were still some fantastic times, when I felt blessed being Jewish. I still remember the wide grin encompassing my whole face on my Bahmitzvah aged 13 (A ceremony when a Jewish man come of age). Reading from the Torah, I felt the presence of God and the loving embrace of my family and friends who had come to experience the joy of my Bahmitsvah.

Age 14 to 16 was tough. Alongside, all the teenage hormones which can make life nightmarish, I spent lots of time desperately trying to fit in with ‘the cool kids’ by hiding my Jewishness and if pressed making a joke of it. I went along with the antisemitic taunts masquerading as banter, which were like a dagger to my heart, but which I greeted outwardly with a nervous smile and a hollow laugh. Most of the jokes were around Jews being money grabbers, selfish and greedy. There was the ubiquitous dropping of coins and jokes about Jews getting sweaty in banks with all the money around. Sometimes it got sinister, the idea that Jews were in charge of the world – and given that why was I not rich. I tried to convince myself it was all banter.

At 16 I moved to a new school and resolved to never hide my Jewishness again. Its an important part of my identity and I will always be proud of being Jewish. Throughout university even when I saw antisemitism at Leeds University where I studied, I never again hid my identity.

At the age of 22 when I entered the world of work, I saw how antisemites would pretend they were anti-Zionist, but in their anti-Zionism frequently expressed antisemitic tropes. Terms like ZioShill, ZioNazi and Rothschild Zionist were the latest word accessory for antisemites.

The last two years have been a living hell for me when it comes to antisemitism. Every week I monitor pro-Corbyn Facebook Groups and Far-Right Facebook groups. The sewer of antisemitism which I monitor and record, is like an open sewer in these groups. Jews are all called disloyal, Zios, smear merchants, liars, part of a global Rothschild or Soros, whingers, string pullers, warmongers and much more. Indeed, what I’ve recorded goes to 100s of pages. It makes me feel as a British Jew that I am under attack and unwelcome in the country and I am not alone as one of over 300,000 Jews living in Great Britain feeling like this.

I hope I have given you a small insight in to the human impacts of antisemitism and why as fellow humans, we need the Muslim community to be #ActiveAllies in combatting antisemitism, as you should expect of the Jewish community when it comes to Islamophobia. 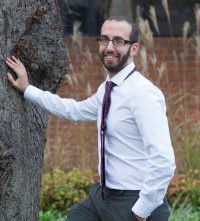 Stephen is a young British Jew with a passion for writing and speaking out against intolerance.

From a young age, Stephen has been interested in the world and people around him. It is this which leads him to want to work to bring people together to challenge prejudice.

As a student at Leeds University, Stephen was active in the Jewish society and since graduation, he has held a number of roles including working in UK Parliament for an MP and for a variety of campaigning groups, which has involved him monitoring and campaigning against antisemitism and other forms of hate.