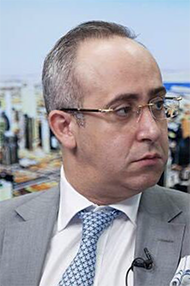 Ghanem Nuseibeh became Chairman of Muslims Against Anti Semitism in May 2018. Born in 1977, he comes from an old Jerusalem Muslim family who are custodians of the Church of the Holy Sepulchre. Ghanem has been a campaigner for interfaith and anti extremism work for over 2 decades, where at university he led the UK’s first Muslim-Jewish interfaith group and contributed to the 1997 Report on Extremism on Campus in British Universities by the Committee of Vice Chancellors and Principals of UK Universities. He is Patron of the British Friends of Neve Shalom Wahat Al Salam since 2001 and of Faith Matters since 2017.

Professionally, he founded Cornerstone Global Associates, a strategic advisory consultancy advising governments and private sector clients from around the world. He has a degree in civil engineering from Imperial College London. He was a Senior Visiting Fellow at King’s College London Department of Middle East and Meditteranean Studies and Visiting Fellow at Harvard University’s Law School Edmond J Safra Center for Ethics. Bloomberg (Quint) described him as “foremost expert on the Arab World” and The National newspaper as “the oracle of the Arab World”.

In 2019, he spoke at a rally in Parliament Square against anti Semitism in the Labour Party and co-signed a letter published in the Guardian encouraging voters not to vote for Labour on grounds of anti Semitism. He is regularly quoted by UK and global media.

He tweets in his personal capacity as @gnuseibeh